In one of David Allen’s recorded seminars, he mentioned going around your living space with your significant other and making the “mambo honker” master list of everything that isn’t the way it’s supposed to be, where it’s supposed to be. My wife Andi and I started this inside our house a while back but it was left dormant and unfinished. Lately both of us have been really focusing on organization and productivity and it spawned us wanting to get started on it again. We’ve been focusing on the backyard a lot recently so we thought the best place to start was there.

I’ve been in the market for a decent outliner for a while now. I’m a big Omnifocus fan, but Omni Group’s “Omni Outliner” is just too expensive for my needs at $80 for the Mac and iOS combo. With starting our master list again, I really wanted it in an outliner where we could move things around easily and keep a hierarchical list of rooms with the items that needed to be done under each room. I searched the App Store and found Cloud Outliner 2 for the iPhone. It immediately appealed to me because one of it’s flagship features is syncing with Evernote, an app we already use. Instead of having yet another place to store information, these lists could be located where we already go to for information. I purchased the Pro version for iOS and we headed to the backyard, glass of alcohol in hand (a requirement for any home list making session). 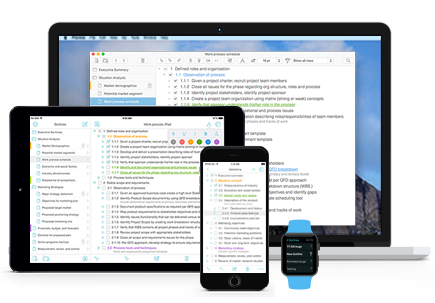 Even after just a few minutes of use, I could tell Cloud Outliner 2 was exactly what I was looking for. It was easy to get items into the app and move them around when needed. I tested out the Evernote sync too and it was nearly instant, plus it’s a two-way sync. Changes made in Evernote modify the original outline as well.

I’ve now purchased the Mac version which syncs in just the same way. $13 for the pair of apps is completely reasonable to me. We even started a few other checklists as the ideas really started flowing during our discussion. We now have seasons prep lists started for things we need to take care around the house to get ready for the next season.