Gaining Insight By Tracking My Time

Last week, I stumbled onto the Time Tracking Challenge from Laura Vanderkam. I had recently enjoyed her wonderful TED talk on “How to gain control of your free time”, so I started following her on Twitter. Of course I’m always willing to try a new habit, especially on a Monday morning when I have all the positivity and promise of the week ahead. I signed up and immediately started tracking what I was doing, in 15-minute increments, for the 7 days. 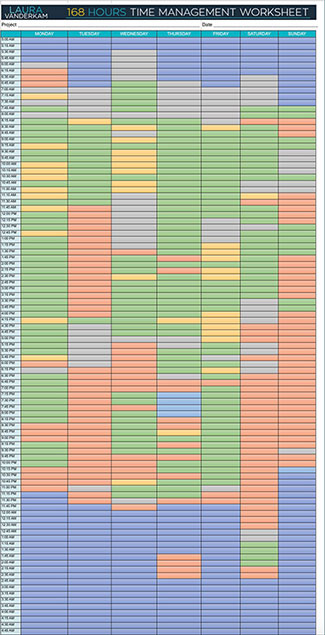 Laura provided an Excel file you could use to start tracking. Being a Mac and iOS guy, I opened it up in Numbers and saved it to iCloud so I could update the file from either my Mac or my iPhone. It actually worked quite well, though I ended up a couple times with conflicts and had to figure out which file I wanted to keep.

As I got started, I found it was actually easier than I thought it would be. I was already used to tracking during my work day for billable reasons, so really the only thing new was tracking my off hours. I first downloaded an app that could do repeatable 15-minute timers so I could just get a notification on my Apple Watch to remind me to document my time, but I downloaded a trial that would only repeat 4 or 5 times. I stopped using it within a couple hours because I was doing fine remembering without it. I never really went any long stretches without updating my file. At most, maybe 2.5 hours or so passed while doing one or two tasks, and then I would update it with everything I did during that time.

I did notice some interesting things during the week. Similar to how tracking your food intake makes you more accountable for what you put in your mouth, often times I was more motivated to do something productive just because I wanted to write down that I was productive on my timesheet.

I think I also felt less guilty during my leisure times. My wife and I actually took the Tuesday off when Apple announced its latest products, and I felt at ease relaxing and watching the event as well as researching and exploring the new products because I knew I had been pretty productive earlier in the morning and was planning to get back to my to-do list later in the afternoon. It was easy because what I did was written down and viewable from a distance and I could reflect on it.

Laura instructed her participants to organize their time into some general categories. To do this I made a quick legend using colored boxes and decided on 6 categories:

I then went through my spreadsheet and assigned one of those 6 categories to every 15-minute block by color coding the cell. I then figured out the breakdown of just how I utilized my time by percentage as well as how many hours during that week I spent on that task.

So after tracking and analyzing 672 blocks of time spanning 168 hours, what exactly did I learn?

Next time I do this, I think I will break out social media into a separate category. All of us could stand to have less social media and more time playing some board games with friends and family. It was a great experiment that I’m probably going to do very soon, if not this coming week. I could probably use a better tracking system if I do this more often. I know there are some time tracking apps out there that get pretty good reviews, I’m not sure if they would be more or less of a hassle than a simple Excel spreadsheet. I could use what I’ve learned from this week and pre-plan in blocks of time for more of my someday/maybes. It will be easier now that I have experienced a week of it, and I have some baseline numbers to compare against. I think this exercise would be beneficial for anyone who is looking to get more meaningful things accomplished. Thank you to Laura Vanderkam for hosting it and I look forward to doing it again!